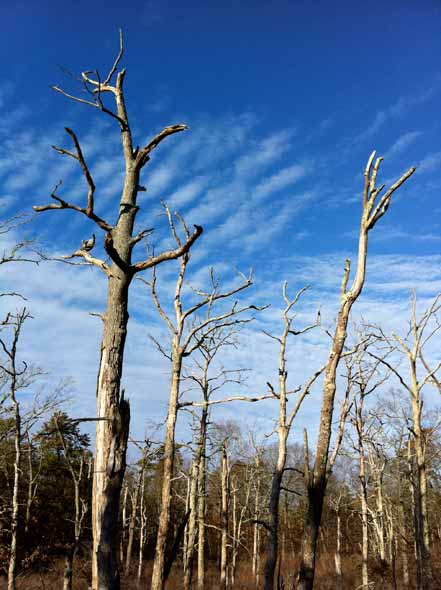 The other week I started walking in the Pine Barrens, and it was such a great discovery. This week I decided to try the Birch Creek Loop in Flanders. It was not so easy to find the starting point for this hike, and I initially found my way into another beautiful spot on the bay, further up. A quick GPS check on my iphone and I saw the spot I was supposed to start in. As it is a small dirt turn-off, I had missed it on the way out. A short drive, and I was there.

This is public land, but not exactly a park. There is a small dirt road with enough space to pull over and park. Finding the start of the trail itself was not easier. As it is an unblazed trial, I was basically just looking for a path into the woods. I had two choices, either start the loop walking along the highway side, or try to find the entry from the dirt path. The highway side was not very appealing to me, as I was looking for a “nature” walk, so I headed down the dirt road, searching for a cement post that would be near the entry point.

In hindsight I would suggest doing it the other way (walking along the highway first) because that would save the biggest most beautiful discovery for the end part of the walk. Oh well, I went backwards. So following the dirt road you find it ends on a sort of boat launch area into the Bay, literally the road drives straight into the water! This hidden cove is amidst tall marsh grass, and is a very beautiful spot.

Facing the water, the entry point to the woods is a concrete post. It was a little overgrown near there, and I was unsure exactly where the path was, but I looked for where I could walk without crushing plants, and eventually found a path. The first odd thing I saw was a little wooden cross, as if marking a grave. I didn’t disturb it, but wondered about it. Who put it there and what did it mark. I continued on, feeling it was slightly sinister, or else someone’s idea of a joke?

Anyway, I went on with my walk into the pines and the air smelled really good. This part of the woods seemed relatively untravelled, and it was like a real discovery to find these huge open spaces below the trees. The earth was covered in a soft bed of golden pine needles that was like walking on carpet padding. Here and there were the trunks of dead trees, still standing upright with jagged edgest reaching skyward. Their weathered hulks, perhaps home to little animals, the small round holes, maybe the entry way to somebody’s nest.

The light filtering thru the pines reflected off the golden needles underfoot and made a spectacular splash of color, here and there, glowing as though somehow touched with magic. Walking here I could easily understand all those old stories of faeiries and elves in an enchanted forest. The light itself is creating the spectre of enchantment, and if you let your imagination go free you can easily be inspired to magnificent tales.

I was drawn to a great fallen pine, a recent storm fatality, no doubt. The piece of trunk that was still standing upright looked as if it was just hacked in two, and the fallen part seemed immense. It had been a very tall tree. I walked around its crushed branches, still with their green needles holding on. Was it struck by lightening, or was it just wind?

In the distance of the treeline, I could see the marsh grass. The forest went right up to the water’s edge actually. And with the pine needles covering the earth, at some point I was unsure where the marsh began and where the ground was solid.

I turned and continued on the path as it now looped south, in the direction of the highway and away from the water. Here the underbrush was thicker, and it seemed this part of the path was even less travelled. As I neared the sounds of the highway, the path began to show signs of careless human activity. Trash. More trash. Then the road. The part of the path along the road was marred by so much ridiculous trash. Not only the tossed plastic water bottle or beer can, but unexplicable things like plastic flowers, and party centerpieces. I stopped looking down and instead looked up, and saw that from here the forest looked almost dead. Bare trees scratching the deep blue sky, limbs shorn and scraggly. I remembered reading in the pine barrens trail guide about a “ghost forest” and I thought this must be it (note: I checked later and this was not the “ghost forest,” that reference is to a place along a nearby trail).

The walk was short — about a mile and a half total, but quite beautiful and for most of it, quite unspoiled. I am starting to really like the pine barrens!