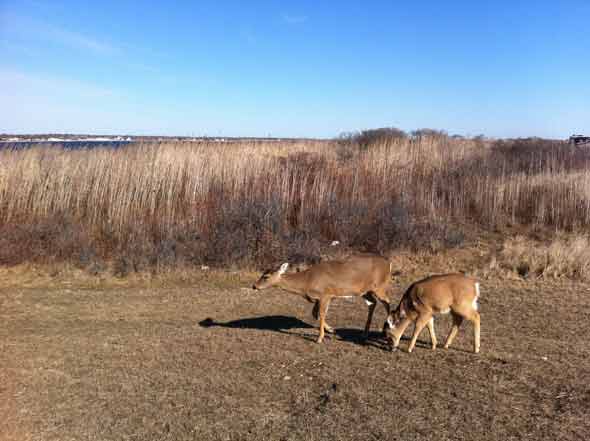 I never realized there was a National Park out here on Long Island, but the Fire Island National Seashore Wilderness Area is under the authority of the National Parks Service, and is protected even in summer when on just the other side of the same beach, hordes of beachgoers fill every square foot of sand at Smith’s Point.

Today that was not a concern. It was cold and kind of windy, and I didn’t imagine the beach would be crowded at all. I drove out there cross the little bridge that takes us to the parking area for Smiths Point and there were a few cars. I found the Visitor Center for the federally protected land, just on the other side of the road that leads to the beach parking lot. The Visitor Center is in a little tower-like structure with a small observation area that looks out over the beach, and it is connected to a series of boardwalks that go out into the dunes.

I spoke with the Ranger at the visitor center and found out that you can actually go backcountry camping here at any time of the year (but there are only 12 permits a day, and they are first come first serve). She told me also that even in summer it doesn’t get that crowded because the beach-goers want to be near the concession stands, bathrooms, and lifeguard areas of the beach, and though they may spill over a little onto the federal side, they rarely go far down the beach in that direction, and so if we were to come camping here, we are required to walk a mile and a half past the boardwalk before we could set up our campsite, and at that point we would be pretty much alone. She also said that there are two things to watch for when camping out there in summer: poison ivy and mosquitos!

Well, it is cold and windy in winter, and no worries about either poison ivy or mosquitos now. I set off for the trail that begins along the boardwalk, but before i got very far i saw three deer! I was quite suprised, as i hadn’t expected to see deer on a beach (and in fact they were not “on” the beach, they were on the “bay” side of the island, near the tall marsh grass). I made a few photos and was quite glad.

Following the boardwalk across the dunes is an easy walk, and the dunes protect against the wind. It is an other-worldly landscape here. Not exactly what you think of when you think “beach.” It reminds me a bit of desert brush, though not exactly that either. I saw by the footprints in the sand that there were some places where you could go off the boardwalk and take a path that led to the otherside, and so i followed that for a while, coming to the bay side of the island before turning back and re-connecting with the boardwalk.

There were quite a number of people out there enjoying the walk, though not so many that you couldn’t find moments of solitude with the landscape. I continued to the end of the boardwalk, where the Ranger had explained that it used to loop around, but no longer does, and so i went to the beach side, and now walked back along the beach, with the wind behind me.

This seciton of the beach is wild and pristine and has nothing in common with the Smith’s Point beach just next to it (though even that is looking pristine in January). Here it is easy to imagine the experience of first settlers arriving from across the ocean to this little haven. It probably seemed wild and desolate and not terribly inviting. From the beach you don’t see behind the dunes, and so it looks like a desert of sand all around.

As i was getting ready to leave, back on the other side of the dunes, I saw more deer. A whole herd this time. Grazing near the marsh grass. One was sitting in the tall weeds, peacefully, just like a lawn ornament!