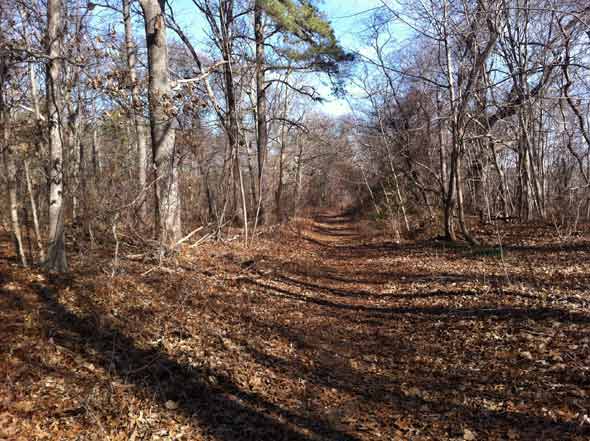 The closest place to go walking in nature is a relatively “new” park, that is as of yet basically undeveloped. It is called the “Lily Pond County Park”, and it groups together several areas that were kind of abandonned wooded areas that had overgrown and were reclaimed by nature. What is now a “park” once had a road going thru it that kept flooding with the rising waterlevels of the marshes, until eventually the towns gave up and just let it go under, to the point where you really can’t even imagine a road ever was there. The area also includes land that was part of an old home in the center of the woods. I am not sure the last time anyone ever actually lived there. We used to sometimes walk our dog in the “woods” when I was a kid. And local kids used to use it for dirt-biking.

People still do walk their dogs here, but the dirt bikes are blocked by metal gates and fences now. I’m not sure when it officially all became a park, but over the last few years I have been going there to walk when I don’t have enough time to get to a larger park, and it is a fairly interesting walk, depending on how you go. Starting out from the closest entrance over on Stuben Blvd, at first it is disconcerting becasue the only “trails” go right behind the backyards of suburban houses. But soon enough you are deeper into the woods to at least feel like you are in nature.

Depending on which of the unmarked paths you take, you can end up right at the northern edge of the marsh (there is an interesting walk on the other side of the marsh, as well), or you can loop around to a clearing where the old house still sits. The local preservation committee is trying to restore it, and I can see progress, small changes, since the last times i was there (back then it looked like people had broken into the place and were using it as a “hangout,” but now it is well sealed off and locked). Random paths wind thru the woods, though you are never so deeply “in” that you cannot here the road on the other side of the marsh.

Occassionally I see squirrels frolicking in the trees. They are not so used to people, and when they hear me coming they rush up the trees, flicking their tails and making that strange “barking” noise they use to alert each other to danger.

It is a short walk, but it is still a breath of fresh air, and a little bit of nature, and it is right down the block. The best part of this place is the fact that there aren’t any marked trails (yet), so you can have the impression that you are really exploring the land, taking a turn here or there, a bit different each time you come. I imagine that may change as the park is developed, but at least for now it keeps it interesting for frequent visitors like myself…