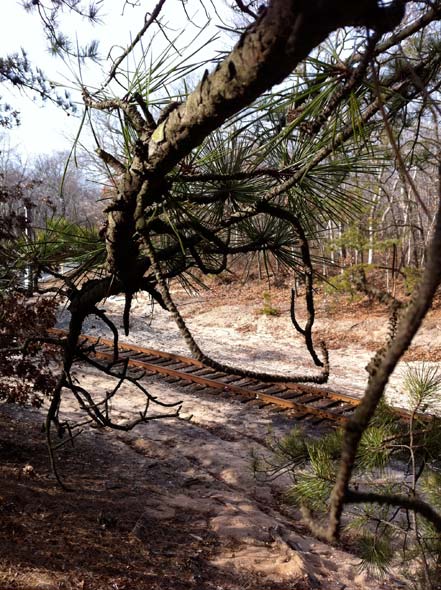 A very cold (hi of 33) but bright day, and I was determined to explore the Pine Barrens trails I had discovered online. I decided to start with an “easy” one, according to the little brochure I’d downloaded, a short loop that they referred to as “El’s trail” that was in Manorville. I drove out there, and it seemed to be a very small park that almost didn’t look like a park when you arrived.

It looked like someone’s house. And it was betweeen two other houses, but it was clearly signed as the park entrance, and the little house was the headquarters. Unfortunately the door was locked, it was closed, and there were no maps available at the little kiosk outside (I imagine they don’t expect many visitors in this weather).

I did have the little map and trail description I downloaded, so that would have to suffice. And according to that, the trail was marked. So I set out on the path, and at first it was like walking a bit through a dead forest (being winter and all that) and I didn’t see much difference between the “pine barrens” and any other wooded area.

As I walked, I saw a clearing between the tall bare trees and there in the center stood a perfectly triangular-shaped Christmas-tree type tree. It was almost like what I imagine the Druid’s sacred tree to be like. Standing there alone in a circle of these bare trees, this one green tree (I know according to legend Druids worshiped the oak, not a pine tree, but this is my imagination, so I can make connections however my mind sees them), it was like a holy tree, and I made a few photos of it, and wondered if that is what the pine barrens are like.

There were numbered markers along the loop (but as I didn’t have the trail guide, I couldn’t tell what they meant). At one spot, I saw a path going back by the electical lines, and on my map, our trail was supposed to cross electrical lines, so I took that direction and ended up in a field with evidence of lots of deer (but no deer sighted). I continued along the wires for a while looking for some kind of blaze or other sign of the trail on the other side, but didn’t see any. I did see another lightly used path, and as I followed it, I realized that I had found the “pines barrens.” I was in the middle of a whole forest of tall thin wiry pines.

Soon I came to the railroad tracks. The booklet mentioned an abandoned rail bed (but these tracks look well maintained). Still, I felt like I had more or less found the trail, and so I continued walking along the quiet tracks, thinking of the old hobos who used to hop the rails to move from town to town.

The tracks were coming to a grade crossing, and I saw blaze marks on my right. The blaze was not the right color, but the trail did go in the direction I needed. I picked up that path, and soon found the correct color and the correct trail for the extended loop through the pine barrens proper.

I was now walking on the heights and in the treeline to the side of the tracks, until the trail began to part from the rails, turning south.

Not far from the electrical lines, I was very disappointed to see that some folks haven’t been practicing “Leave No Trace” — the clearing was strewn with garbage, and piles of old tires. It was a disgusting sight in the middle of a protected wilderness area. I made some photos, before continuing on toward an area of marshy detail on the edge of the woods, then eventually back to where I could pick up El’s Loop again, realizing I ended up on quite a long walk compared to what I’d set out to do!

It was very cold by the time I got back to the jeep, yet I decided to try to drive out to the next trail in the booklet — Birch Creek…