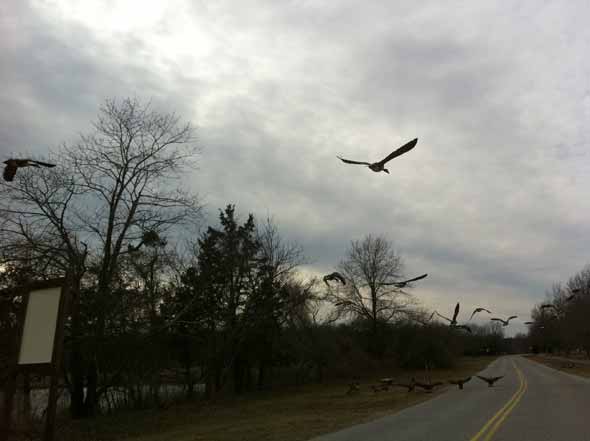 Wanted to try the Greenbelt Trail again, this time I picked it up at a starting point from the Sunken Meadow State Park, which is actually mostly a big beach, and I imagine in summer it is packed something awful, but as it is the middle of winter I expected some solitude. I was wrong about that, as the nice weather encouraged lots of folks to get outside, and many went to the state parks, I suppose.

Unlike the portion of the Greenbelt trail I did last time, where I didn’t encounter a single person, here I practically couldn’t find any peace and quiet. People chattering loudly as they crashed thru the woods, kids running, families picnicking, and even a small group who was SINGING as they walked. Not any chance to see wildlife, that is for sure, and all I did see were the ducks (or geese), the seagulls, and two lone squirrels high up in a tree, themselves making a ruckus, with the little “barking” sound squirrels can make when they are agitated.

Nevermind, it was still quite beautiful and I seem to have found the one place on long island where they actually have hills! A very different walk from the usual terrain. Starting over the little wooden footbridge where the ducks (or geese) were hanging around (interestingly I think they were “tagged” as I saw a few with bright orange “collars”, I am not sure what they are for or what they signify. Anyway, they were a huge flock. And so after crossing the footbridge I had to pass the picnic area, and then found the start of the trail, ubiquitously along a tar road, and then forking off into the woods.

At first it was less than spectacular, with a view down to the parking lots across the way, but I figured it would get better as we went (and I was not disappointed). Making my way more deeply into the woods I saw the terrain was like rolling hills, not very high, but lots of modest ups and downs, and that was interesting and different from the places I have been walking out here.

It’s not long before I found the first interesting overlook, and realized how high up we were. I could see down to the beach, and the river, and there was this sandy gully that looked as if it channeled rain water down toward the beach. It was an excellent vantage point, and quite a spectacular view, and I was almost tempted to try to walk down a bit, but I sensibly realized that it was kind of steep, and if I walked down I would have to find my way back up somehow, so I returned to the main trail and followed the part that branched off along the edge of the heights, where i could enjoy several beautiful overlooks, and made a mental note to come back here when it is a little warmer, with some supplies to sit and draw or even paint (while weather is perfect for walking, it is not quite warm enough to want to sit out for long).

I continued around on the heights, looped back into the woods a bit then back to the heights, and eventually came out on the other side of where I was ended last time (right at the kayak take out point), so I had “hooked up” today’s trail with the one I did the other week. Satisfied, I turned off on another loop into the woods a bit further, just to extend my walk, then decided I’d better go back towards the state park where I had left my jeep.

I didn’t linger on the way back so much, and where I saw a different path, which was blazed red, I decided to try that, for a different route, but as I was going along I saw that it was descending somewhat steeply, and I couldn’t really see where it let out. I paused as I tried to figure out if that would take me out to the right place, or if i would have to climb all the way back up again, and return to the white trail. While I was trying to decide, a woman walking her dog was coming down, and I asked her if the path did indeed intersect back into the park, and she said, yes, so I headed down.

This section was very steep and sandy, so sometimes had to hold onto a tree trunk so as not to slide down and trip on exposed roots, but made it down to the bottom right at the shoreline, and ducks were swimming in the reeds, and it was also quite beautiful. Now I could look back upwards and see how high we were!